Pamela Wise is an exciting female African American contemporary pianist that fuses post bop jazz with firey Afro Cuban rhythms. Pamela has five CDs to her credit on the international jazz scene including her most recent A NEW MESSAGE FROM THE TRIBE produced by Wendell Harrison. Her ensemble consists of the finest worldly known musicians that reside in the Detroit area such as jazz guru Wendell Harrison, trumpeter Dwight Adams, percussionists Gregory Freeman and Mahindi Masai to name a few. Pamela has received many awards for her compositions including the 2016 Kresge Arts Fellowship award.

Pamela Wise began composing music and playing the piano by ear at the age of 5. Her father Robert C. Wise who was a bassist decided to start her on piano lessons when she was 8 years old. After studying the piano basics, Pamela began playing for her church choir which was directed by her father. While in high school, Pamela formed her own R&B group called the Ohio Movement which performed throughout the Midwest and East Coast. After 8 years with the Ohio Movement, Pamela decided to leave the band. “I always wanted to be a jazz composer and pianist, it was definitely in my blood after growing up listening to it.” When her brother Craig finished college and moved to Cleveland, Ohio, in 1978 he encouraged Pamela to move with him and she did. While in Cleveland, Pamela attended Cuyahoga Community College and further studied music. “Shortly after Craig received an employment opportunity from a prominent bank in Detroit, MI and we moved to Detroit in December 1979. I worked with several R&B groups in the Detroit area, but I still wanted to play jazz.”

Pamela bumped into Wendell Harrison in a recording studio while taping some of her compositions. Wendell (who later became her husband) became interested in her music and started featuring her compositions on his recordings as well as featuring her in his ensembles. Pamela was blessed with the opportunity to be performing and composing for legendary artists such as Freddie Hubbard, Woody Shaw, Leon Thomas and Eddie Harris (to name a few).

In 1989, Pamela started forming her own ensemble with saxophonist James Carter, trumpeter Dwight Adams, bassist Jaribu Shahid, drummer Ali Muhammad and percussionist Andrew Daniels. Then Pamela received two Creative Artist Grant awards from the Arts Foundation of Michigan to write compositions demonstrating the link between Afro Cuban and jazz music. In addition, she was still performing with her ensemble and freelancing with other groups. One of her most favorite freelance project in 1994 was co-writing the title track on violinist Regina Carter’s CD I WANNA TALK TO YOU. Regina, Pamela and cellist Akua Dixon Turre took some of the finest live music to airwaves at WDET FM public radio on Kim Heron’s show, Destination Out.

In 1994, Wendell Harrison introduced Pamela to world renowned percussionist Jerry Gonzalez and produced her first compact disc SONGO FESTIVIDAD. You can also find her most recent works; A NEW MESSAGE FROM THE TRIBE, KINDRED SPIRITS, NEGRE CON LECHE, and PAMELA’S CLUB are available at several digital download sites including CDbaby.com, iTunes, Amazon, and many others.

In addition to the performances and recorded releases, Pamela also serves as Music Minister at her church, a piano teacher and is executive director of Rebirth Inc. a non profit jazz performing arts organization that produces live concerts and jazz education programs. 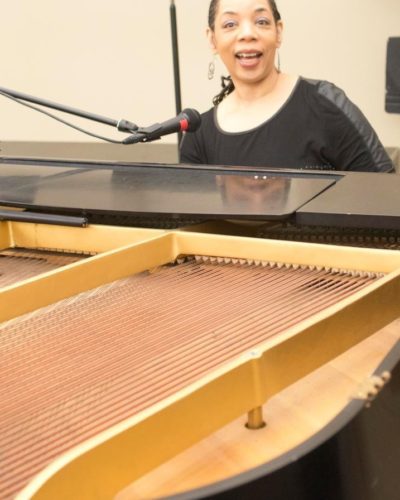