Originally from Howell, Michigan, Michael Block is noted for his position in the Livonia Symphony Orchestra. A long time resident of the Detroit metro area, Michael has established himself as a successful freelance trumpet player, having performed at various local venues throughout southeast Michigan. Michael has also made a name for himself as a private educator in the Howell, Okemos and White Lake area. Michael strives for a dark and broad tone quality that emits energy capable of fueling all genres of trumpet music! 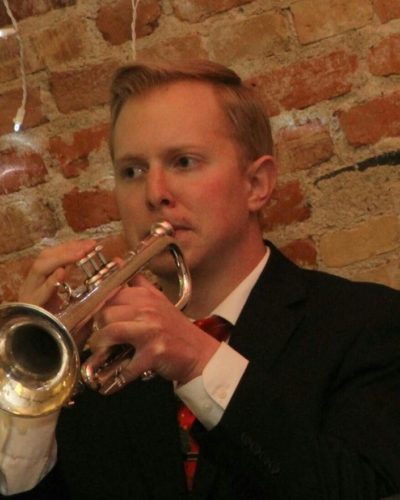 Michael Block is young Trumpet player from the Livonia Symphony Orchestra with over 5 years of professional playing experience.  He possesses a broad trumpet sound that has the ability to fill an auditorium. Michael previously participated in the DaCamera Faculty Brass Quintet of Ball State University in 2017.  During his time as a graduate student at Michigan State University, Michael was invited to perform at the International Trumpet Guild Convention in Columbus, OH.

Michael’s passion for trumpet performance began early in life.  His inspiration came from seeing his first live jazz concert that featured Marcus Belgrave and his tribute to Louis Armstrong.  Since then, Michael has always driven himself to become a stronger trumpet player in all genres. That drive inspired him to pursue studies at Eastern Michigan University as well as Michigan State University.

During his collegiate studies, Michael found his passion for classical trumpet as he held principal positions in the EMU Wind Ensemble as well as the EMU Symphony Orchestra.  During his graduate studies, he performed in the MSU Wind Ensemble where he had the enjoyment of performing on their album “In this Broad Earth” featuring the music of Steven Bryant.

Michael’s primary teachers include Carter Eggers, Justin Emerich, Rich Illman, Etienne Charles and Brittany Hendricks.  His studies have driven him to achieve a rich and dark sound that is extremely versatile throughout all genres. He has the ability to perform with a dark classical sound as well as a lively jazz sound.

Michael has always sought to explore every genre of trumpet performance.  He has performed at various venues throughout southern Michigan, including Pease Auditorium, Wharton Center for the Performing Arts, The Grosse Pointe Theatre, The Village Players of Birmingham, Detroit Civic Winds as a Mentor/Instructor, as well as the Carhartt Amphitheater in Detroit.  Other ensembles include the Ambassadors Big Band, Livingston County Concert Band, Saline Big Band, and Venture Church. He has been invited to perform as a guest artist with the EMU Wind Symphony as well as a guest feature at the EMU Undergraduate Symposium.

Michael can be heard performing with the Livonia Symphony Orchestra during their regular season as well as the summer.  He also performs with the Block/Barden Jazz duet at various bars, clubs, restaurants and senior homes throughout metro Detroit.  Michael can also be found performing as a church musician, performing in various denominations of churches in the area with numerous ensembles.